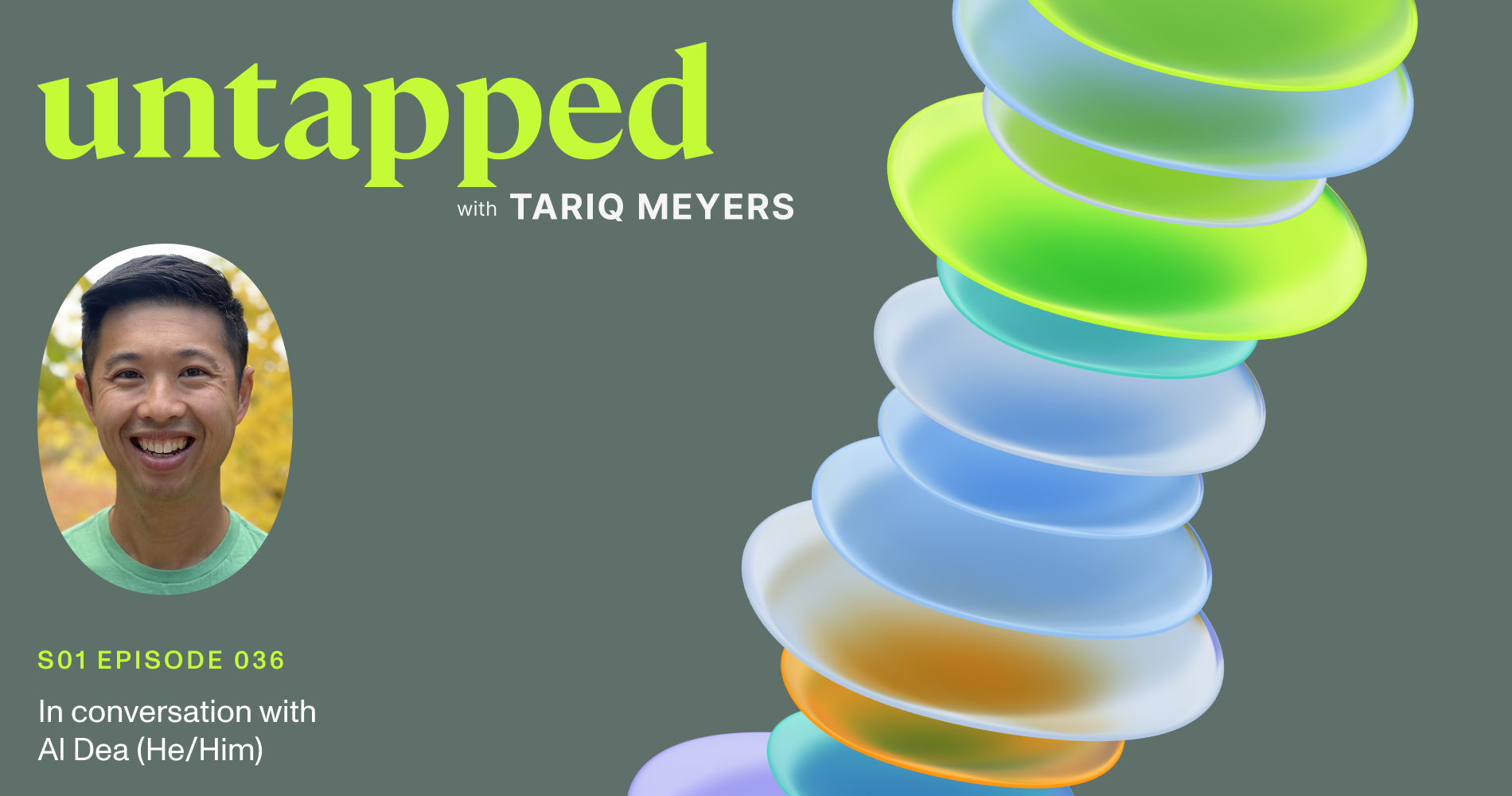 Thanks to his Jesuit education, career and leadership consultant Al Dea, Founder of Betterwork Labs, intimately understands the power of reflection.

“Jesuits really believe strongly in this idea of reflection and getting a chance, every now and then, to pause, evaluate what you just did or your surroundings, and come to some sort of reflection or understanding of that experience, and then to fuel that thought into how you go about approaching the world after that,” he explained in the latest episode of the “Untapped” podcast. “If you do this enough, and with enough muscle and intention over time, I think it yields a greater awareness about your surroundings, and about your place as one little tiny dot in this bigger world.”

Using reflection as a foundation for his work, Al leverages the knowledge he’s gained to find his place in the bigger DEI space. In his frank conversation with host Tariq Meyers, Al shares some of the observations he’s made thanks to this tenet of the Jesuit tradition.

As people spend time reflecting on their lives, they inevitably think of those who aided them in their success. This creates a bigger awareness about the importance of mentorship—and what role people can play in the success of others.

“If you fundamentally can agree with the notion that doing something successful requires you, oftentimes, to rely on others for help, or access, or opportunities, then I think that also puts the onus on you to start thinking about, ‘Where in my life have I had those opportunities?’ Then, also, ‘How might I participate in ways in which I could create those opportunities for others?’ For me, at least, it's always yes,” Al said. “For me, it's always been about that I've just fundamentally believed the world is not a zero-sum game. I get super excited when I see other people win. To know I could play a small role in that has always been something that has gotten me super excited.”

One important area of awareness that organizations need to tackle to meet their goals is the representation in their workforce—and Al emphasizes that to attain this awareness, companies really need to look at what they’ve been doing and what they need to change.

“An Albert Einstein quote that often comes to mind is ‘Insanity is doing the same thing over and over again and expecting a different result,’” he said. “If I'm an organization that agrees we would like to have a more representative workforce of the actual population, and if I agree that perhaps maybe the efforts I have so far have not risen to the occasion, then I would also want to agree that I might want to think and try new ways to do that, versus using the tried and true playbook of what I've always done because what I've always done hasn't always worked. I think that is the starting point for the conversation.”

As the workplace changes, and technology changes along with it, Al says companies need to pay attention to this evolution when it comes to their recruitment.

“If you're a company or an organization, the tools you have at your disposal to engage with potential candidates through technology allow you to reach more people more consistently and more regularly than ever before,” Al said. “Technology allows you to be always on, so you're allowing people to engage with you and have access to you. It also allows you to scale in terms of the amount of people you can reach. Just by the sheer nature of using technology in new ways, you're opening up the opportunities for people to engage with you.”

No matter where DEI professionals are in their journey, they will inevitably have doubts about the effectiveness of what they’re doing. And that’s okay, Al says. Having the awareness of the challenges they face will help practitioners take stock, move forward, and grow.

“It can be hard to not take it personally sometimes because of how much you care about your belief, whatever it ends up being—whether it's about wanting to recruit in new ways to attract more diverse talent, or wanting to create more space for people to show up as themselves in the workplace,” he said. “The things in life that are worth doing sometimes do take quite a bit of journey, and of effort. In any given moment you may feel defeated or challenged, but it's okay because that's what happens sometimes when you're working on something that's worthwhile and meaningful.”

Find out more about Al’s views on DEI and the future of work on the latest episode of the “Untapped” podcast.